Garlic (Allium sativum) is a bulbous plant and closely related to onions, chives, shallots and leeks. Originally it was native to Central Asia, but its reputation as a food and medicinal herb spread rapidly across the known world. Garlic arrived in the Mediterranean around 3500 BC and it is said that the pyramids could not have been built without it.

It proved to be difficult to discover a wild ancestor, partly because the current garlic is often a sterile cultivar. It is thought that he is descended from either Allium longicuspis or Allium tuncelianum and maybe even from both. Both species are still growing in many parts of northern Turkey and smelling strongly when crushed. In those parts of the world they are still used to replace it when it is not available. 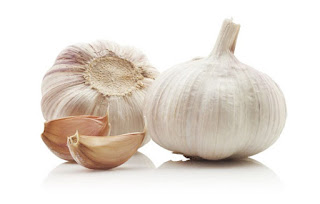 The first part of its scientific name, Allium, is the Latin word for garlic and it seems that it is probably ultimately borrowed from gilgål of galgal, words from a couple of Semitic languages. The second part, sativum, is a lot easier to explain: sativus means 'sown' or 'cultivated' in Latin.

Garlic is a bulbous plant that is easy to grow and you may even succeed in doing that in your own garden or on your windowsill. Put a clove in a pot in April and the bulbs could be ready for harvest as early as August.

The active ingredients in the fresh product are, among others, the sulfur-containing alliin, ajoene and a series of related ingredients. Not so very long ago a lover of garlic would often get you disapproving glances from colleagues the next day, but times have changed. That smell of sulfur in the breath after garlic use was the direct result of a chemical reaction that occurs when it dries. In the beginning you could only get your dried product in the supermarket. Now, the fresh product is, of course, widely available in every supermarket.

Yes, luckily we are now using more and more garlic to flavour our dishes. And that is a very good development, because some ingredients have healthy effects on the human body. According to the latest scientific insights, consuming it may lower your cholesterol and some studies reported a decreased risk of developing several types of cancer (carcinogenesis) with enough intake.

People used to think that garlic had magical powers. Both the Egyptians and Roman often wore a necklace with several cloves of it. A remnant of that ancient superstition survived until the last century when Bram Stoker made us believe that it could deter Dracula and vampires.